Welcome to the Search for a wave unlike any other… barrelling down the line at freight train speeds, folding into the sand bank with more force than imaginable. Join Luke Hynd, Tim Bisso and Gearoid McDaid on their journey to find it, and conquer it.

“My passion in life is to find the best breaks in the world, and combine them with the best swells the earth can offer.” – Ted Grambeau

That is photographer Ted Grambeau explaining how, just a few weeks ago, he found himself standing on a remote African coastline, shivering as the sun rose and the fog lingered, camera in hand. All surfers dream of this mantra – only few have the gift of living it.

“I saw a weather map pop up the other day, and it looked promising for this region. It was a bit far out, however; so I took it with a grain of salt. But as I kept an eye on the forecast I began seeing something that looked … exceptional. About then, a week after I saw that initial map, by the day that I boarded a plane from Australia to Jo-Burg, I was convinced it was going to be a swell to remember.”

Joining Ted on his mission was Australia’s Luke Hynd, the Guadalupe’s Tim Bisso and Ireland’s Gearoid McDaid. Louie and Gearoid were in Africa for a WQS at the time, and had been planning strike missions of their own.

“I had already booked my tickets and was at the airport, en route, when I got the call,” says Gearoid, a thick Irish accent breaking up on the phone line. “I had no idea what I was going to do when I got there, so it was a relief to have a plan in place all of a sudden.”

For Louie, the lead-up to this trip was extensive, although short-lived. “This wave has always been number one on my bucket list. Mostly because of how mind-bendingly long and perfect it is, and as a goofy-footer, I’m always looking for long barrelling lefts. So when Ted gave me the call, I hung up the phone and booked my flights then and there. Ted wasn’t even 100 per cent locked in yet, so I was planning just to wing the entire trip solo, all for the chance to get the wave of my life.” 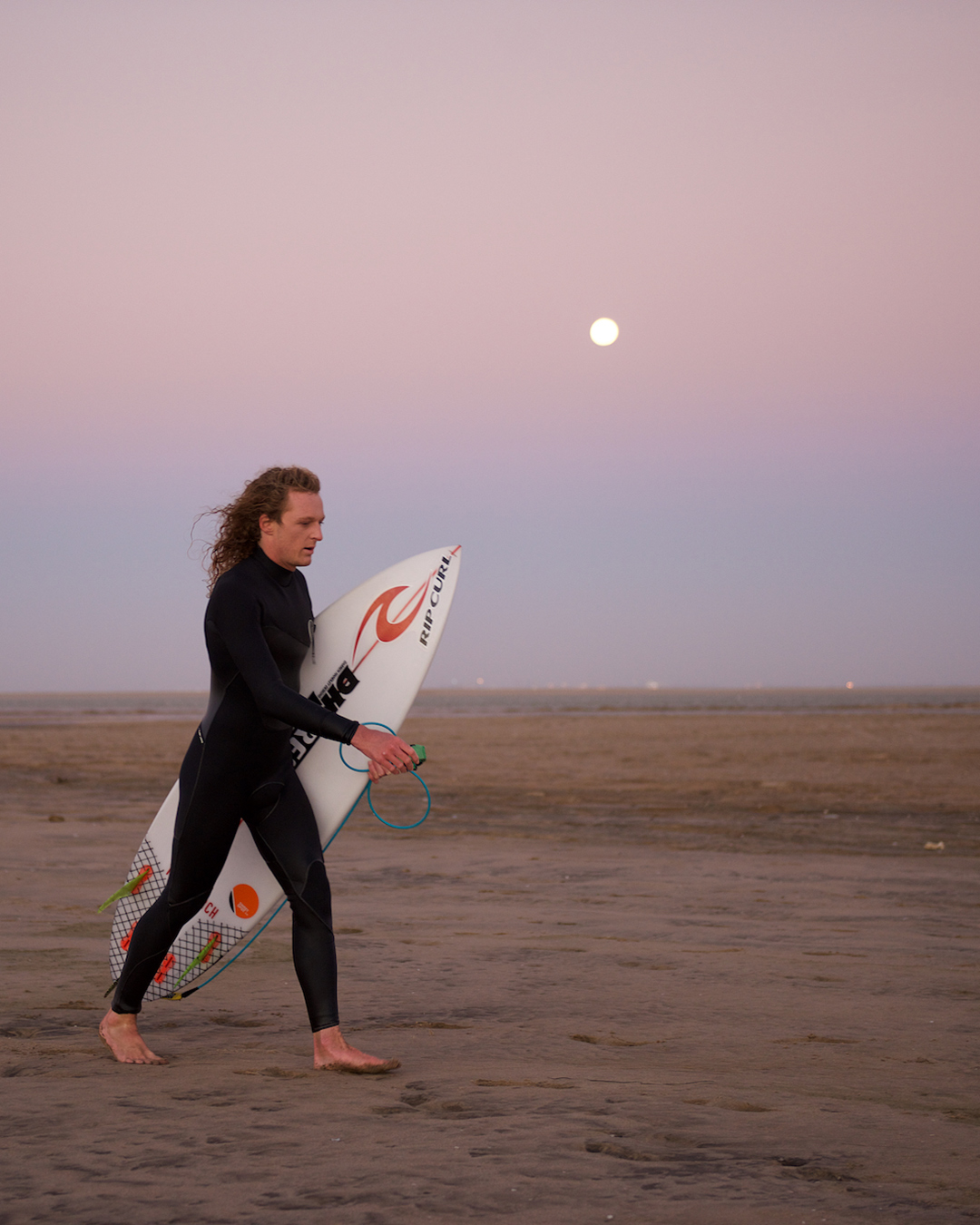 The journey itself is the first test of this wave

No matter where in the world you’re coming from, the time and effort it takes to get to this wave pushes you to your limits. If and when you actually make it through the final flight, and are finally ready to load your boards into the 4WD (that you’ve spent half a day chasing down) – chances are, some of those boards won’t be there. Once you resign yourself to that fact, you begin the drive from the airport to town across one of the most desolate places on earth.

You begin seeing a string of cars, rusted, sand-crusted, half-assembled, strewn across the dusty dunes. These cars are abandoned, so deeply bogged getting them out would have been an impossibility. Here you are, on what feels like an entirely different planet, driving across a desert wasteland of cars. 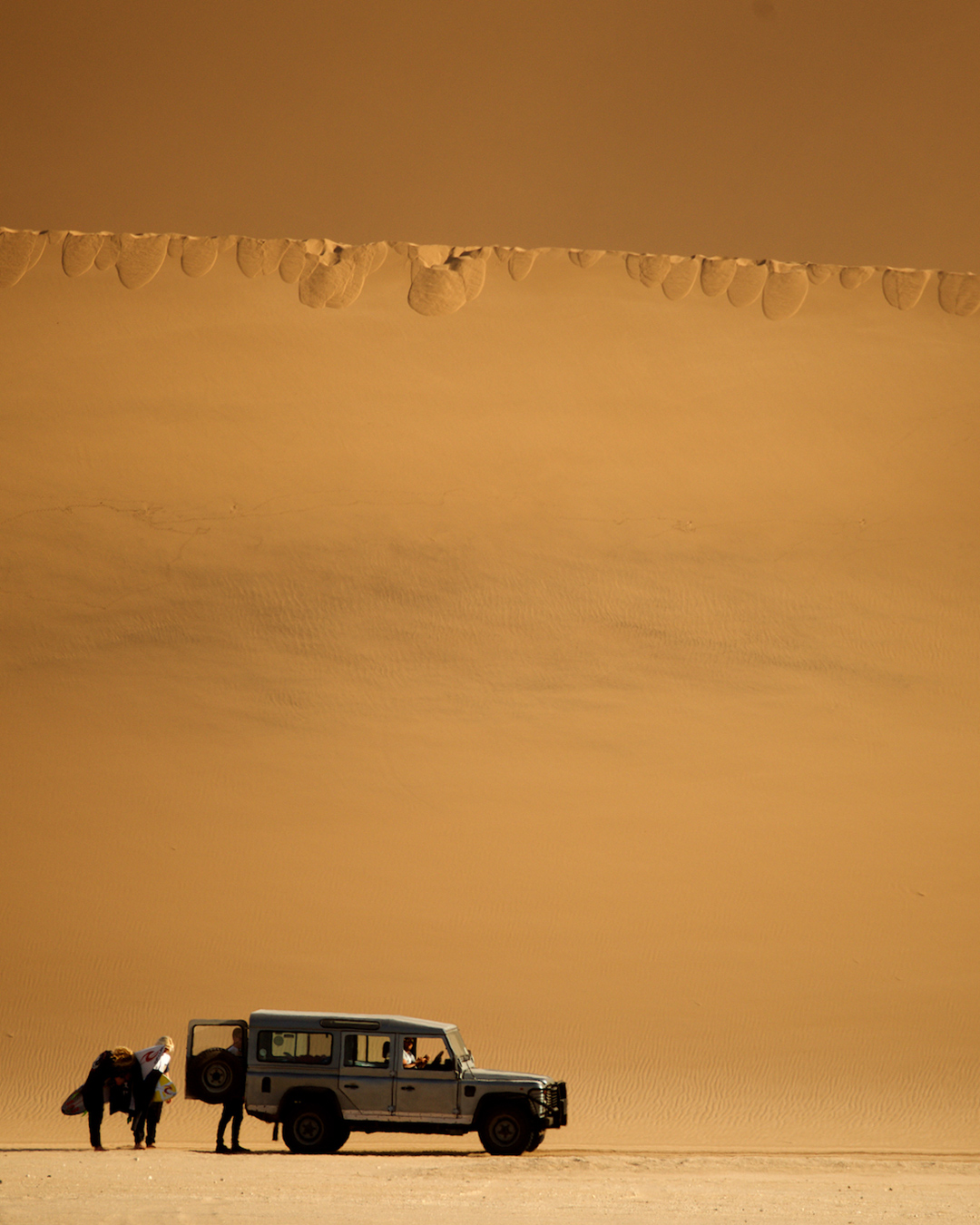 The wave is running like an actual dream. You look at it and you see these visions of you riding inside the barrel having the best time of your life. But ten seconds later the barrel has doubled up below sea level, and you are trapped in a nightmare on a dry sand bottom. This wave will take you down, like a roller coaster into the darkness – Tim Bisso

But three young chargers with nothing to lose, mixed with two highly determined veteran photographers, is a potent combination, and the team made it to the wave as quickly and swiftly as possible.

“It’s about as far away from home for me as you can fly,” says Louie, “so it was a lot of travelling time, but worth every minute and penny. Waking up that first day of swell, just the butterflies of anticipation were enough. Then, as we drove over the sand dunes and I caught my first glimpse of the wave in all its glory … that was one of the most exciting and surreal moments I’ve ever had.” 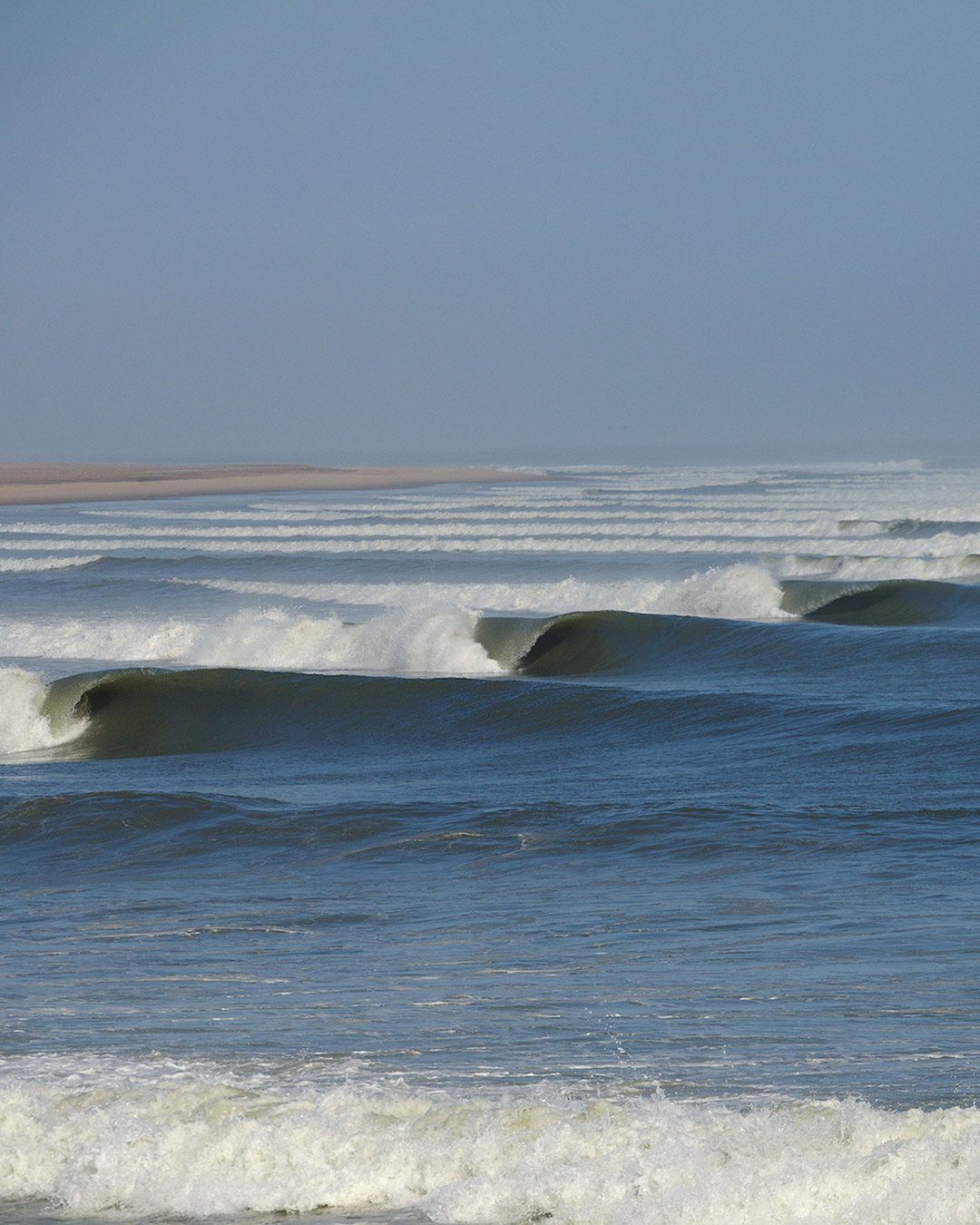 At dusk, the air is freezing cold – a certain kind of chill you only find in very remote deserts. Sharp. Eerie. A thick ocean fog almost always lingers along the coastline, drawn out of the cold-water temperatures running up the coast.

And as the boys drive over the dunes they’re greeted by this scene, barely able to decipher the six-foot lines approaching the coast, breaking perfectly along it, a relatively strong offshore whipping the ocean they race.

“This wave is completely and totally unique,” Ted explains, drawing on knowledge from past trips. “It’s effectively like a swell that runs down a point sideways – a mobile sand flat. It’s just a coincidence of the swell that it travels like a perfect barrel. It grinds.” 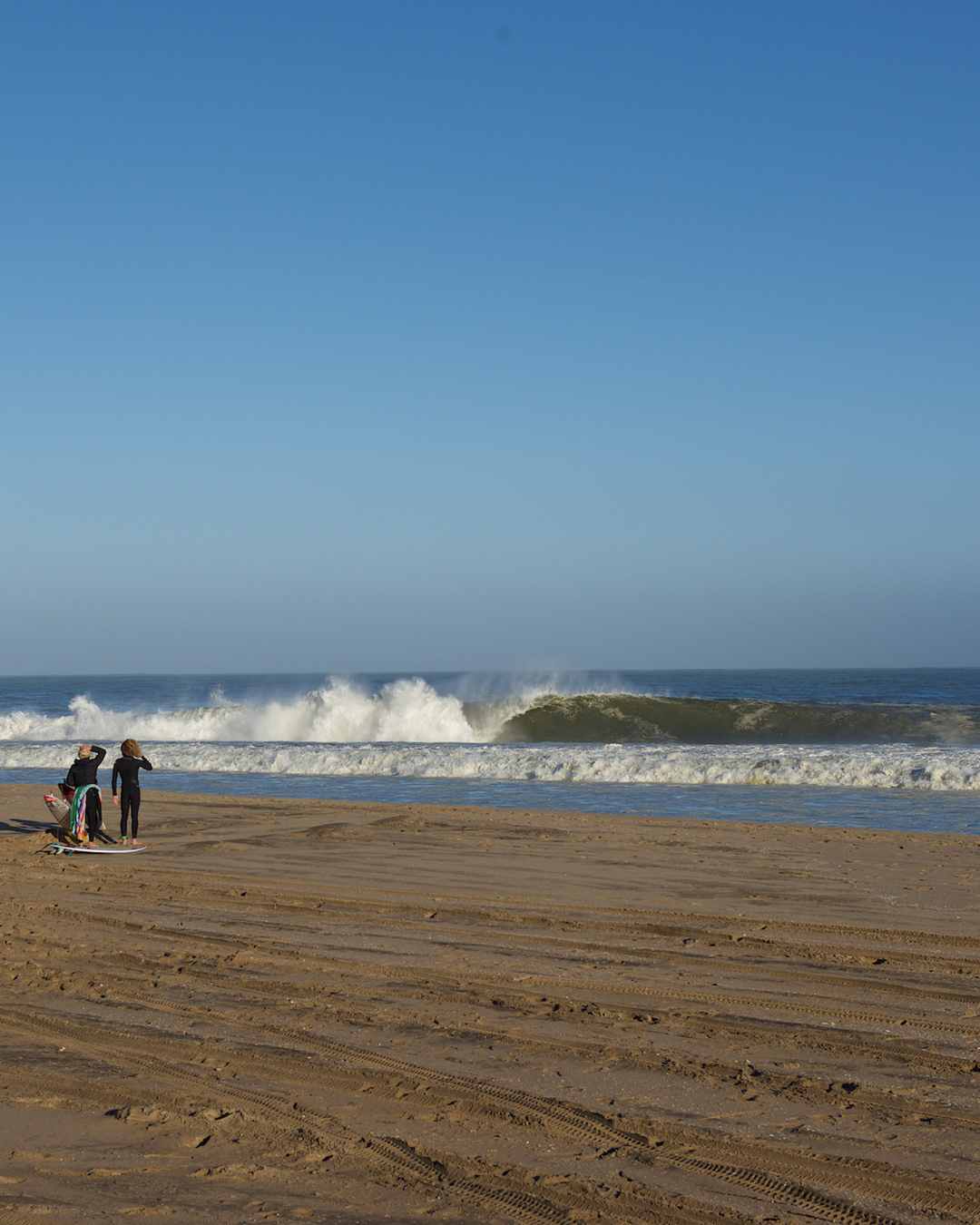 Think of a boat wake, and how the wave just runs down the side of the river and you see these perfect little folding swell lines. This wave folds – it doesn’t break – and it is made of pure energy. When it’s doing that on the correct tide and matching swell, it makes something that is seemingly un-makeable, makeable.

Louie, Gearoid and Timmy didn’t waste any time paddling out. As soon as there was enough visibility the three of them brave the extremely short and highly treacherous paddle-out. See, it’s so shallow that it’s physically impossible to duck dive at the impact zone. That, and the lines come at you sideways – if you get caught, there’s no escape.

The boys make it out without trouble, but it doesn’t take long for the barreling beast to catch up with them. Tim Bisso explains…

“The first wave I dropped into I basically broke half my nose. I was right in front of Ted and Paul Daniel, our videographer, so I knew I had to take the first wave that came before the current took me out of their vision. I dropped in, way too late, I landed on my feet and then the clip came straight onto my head. I slammed into the sand and dislocated my right shoulder, while extending a few ligaments in the other.” 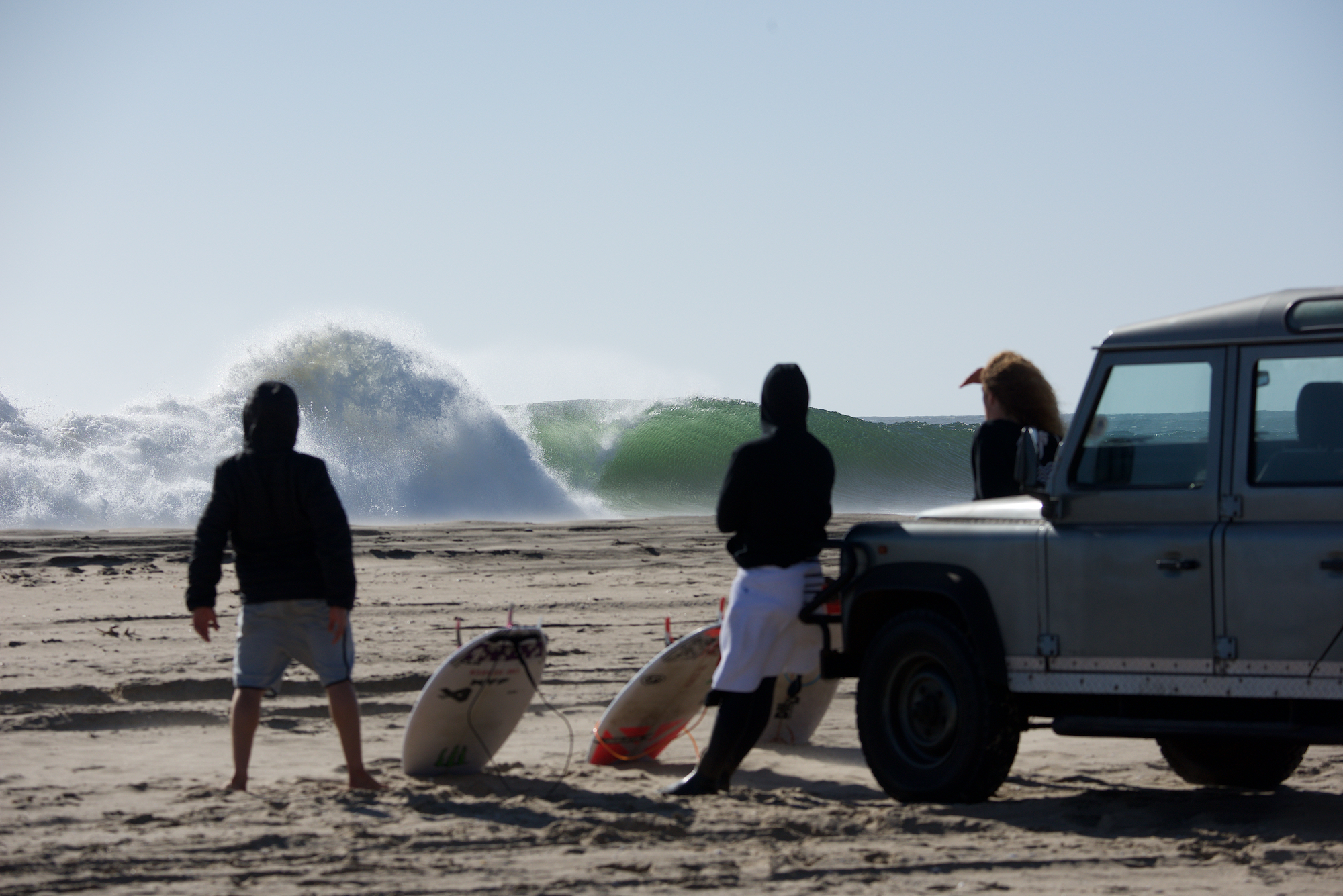 This is a deceivingly difficult wave. At four foot you might think it looks perfect – easy, even – but it’s fraught with a whole lot of dangers.

The sand bank is super shallow and it runs for up to two kilometres at freight train speeds, and faster. The sweep is massive, as if the entire ocean is moving down the point.

“Some days,” says Ted, “guys can get swept two kilometres without ever catching a wave, then they have to get out and walk back up the beach. That’s not rare. And even when you do catch a wave, you still have to get back up to the beach to attempt to paddle out again. It’s a funny cycle to watch – early in the morning, guys will be doing laps jogging, but by the end of the day they’re nearly crawling.

“It’s easy to glamourise something that looks so perfect, but the reality is these guys are taking off on a sand-dredging takeoff that is extremely difficult and dangerous, and is so powerful that its size is often underestimated.” 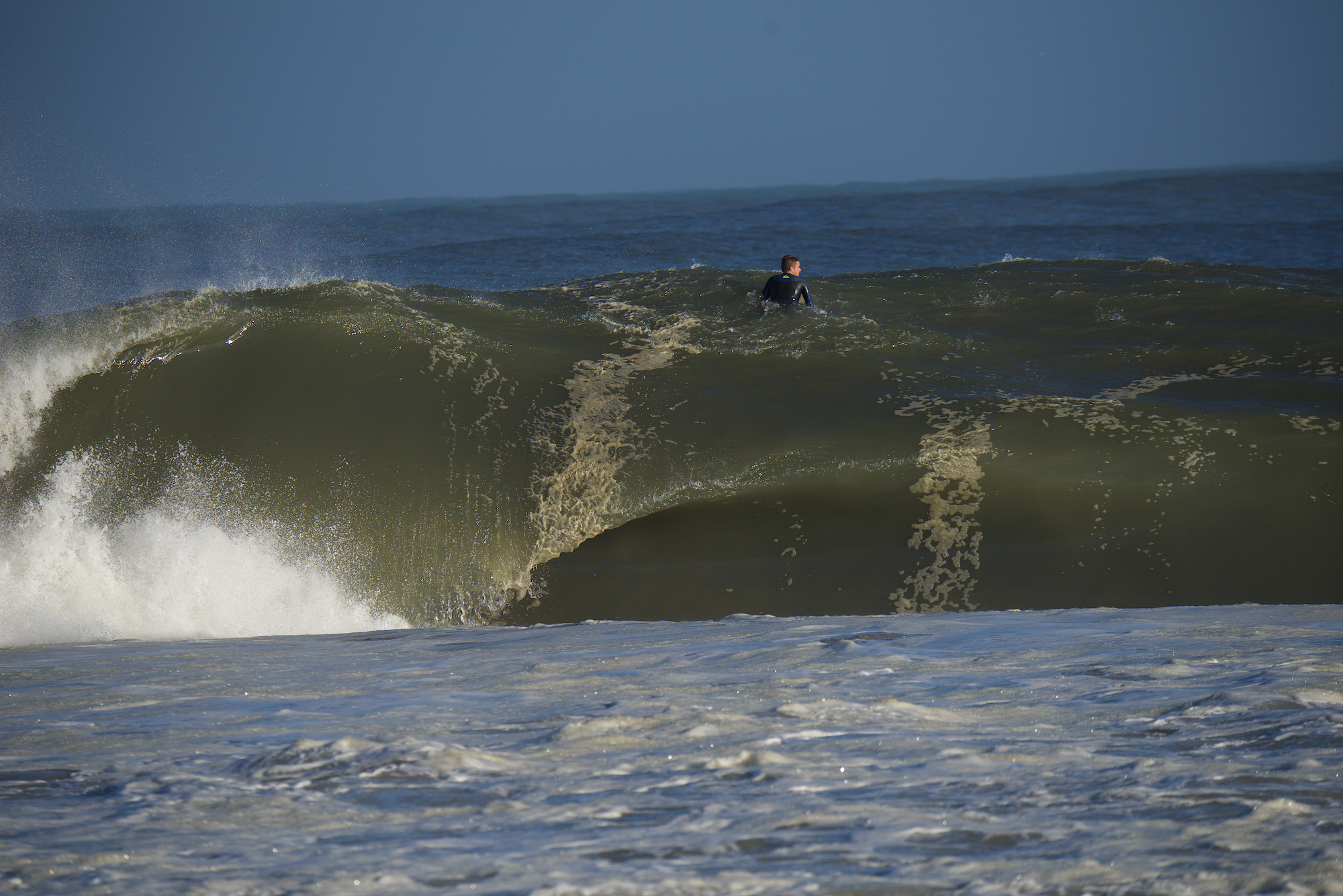 Perhaps Tim Bisso, who suffered the wrath of the wave first-hand, described it best:

“The wave is running like an actual dream. You look at it and you see these visions of you riding inside the barrel having the best time of your life. But ten seconds later the barrel has doubled up below sea level, and you are trapped in a nightmare on a dry sand bottom. This wave will take you down, like a roller coaster into the darkness. It is by far one of the most powerful waves I have ever surfed.”

But with great risk comes great reward, and for most, it’s worth the extra roll of the dice. If a surfer is truly capable of this level of surfing, it’s just as Timmy described it – a dream. Close your eyes and picture grindier Kirra running for two kilometres in the middle of the world’s largest desert abyss. 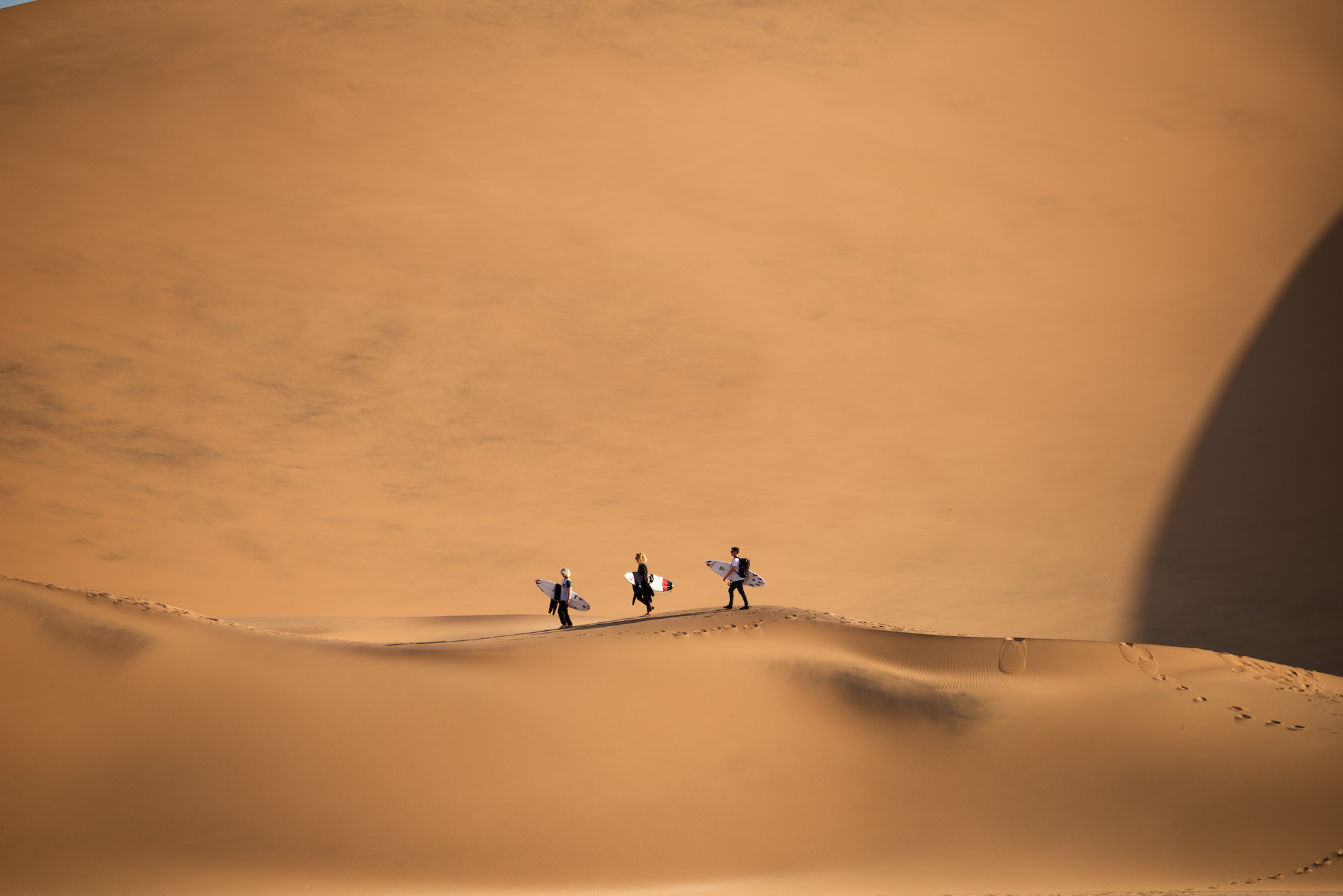 After that first day the swell rose, and with it the fog. Louie and Gearoid woke to a beautiful, clear and stunning day. Freezing, with eight-foot sets and 10-foot sneakers absolutely spinning down the coast, farther than the eye could see.

It was churning itself inside out, and a lot of the bigger waves weren’t even surfable. But it was a sight to behold.

“We were surfing each wave for so long, and so far, that I basically didn’t see Louie once that day,” Gearoid recalls.

From sun up to sun down it was lap upon lap upon lap. “I think after surfing from the crack of dawn to almost pure darkness I would have paddled and walked around 30 kilometres each, probably further.” Remember, it’s been Louie’s dream to surf this wave – and he was willing to push himself to the brink. “Towards the end of the day I had to push myself through pain to get back out there, because I knew it might be the only chance I’d ever have to surf waves like that again. The reward of picking the right wave, it’s the best feeling in the world. It just keeps throwing sections on sections, to the point where you almost can’t handle it anymore.” 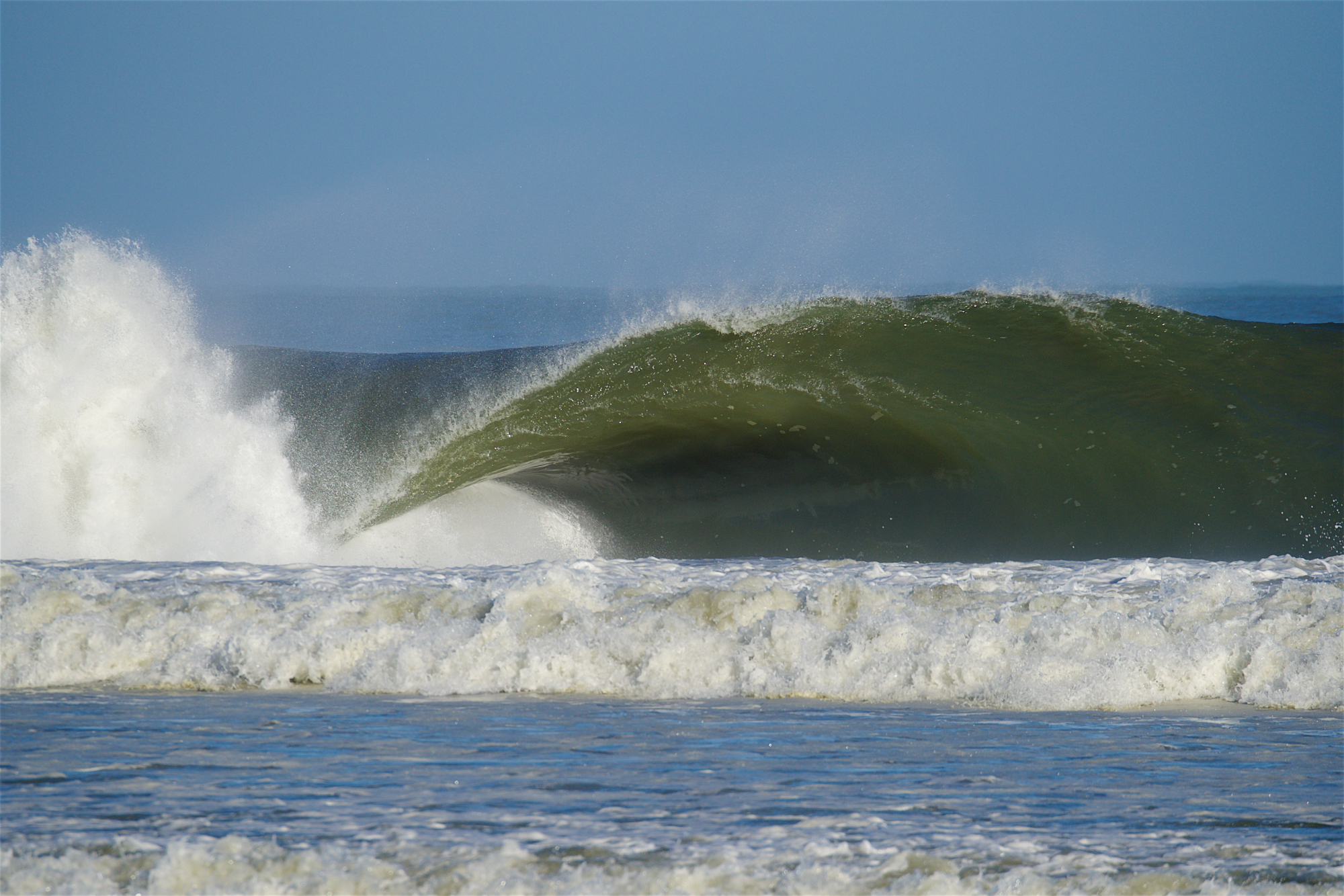 This is not a wave for the faint-hearted.

It is not a place you will walk away from feeling confident about your skills in the surf. It is a place that is ruled by the ocean and the force and speed at which it can provide some of the most amazing moments of your life – and take them away in an instant. It is the result of Searching this planet and pushing limits, in the deepest sense of the phrase. It is a freight train unlike any other, placed in a land so foreign it seems planets away, and it is breathtaking.